Prevention of Diseases During Floods 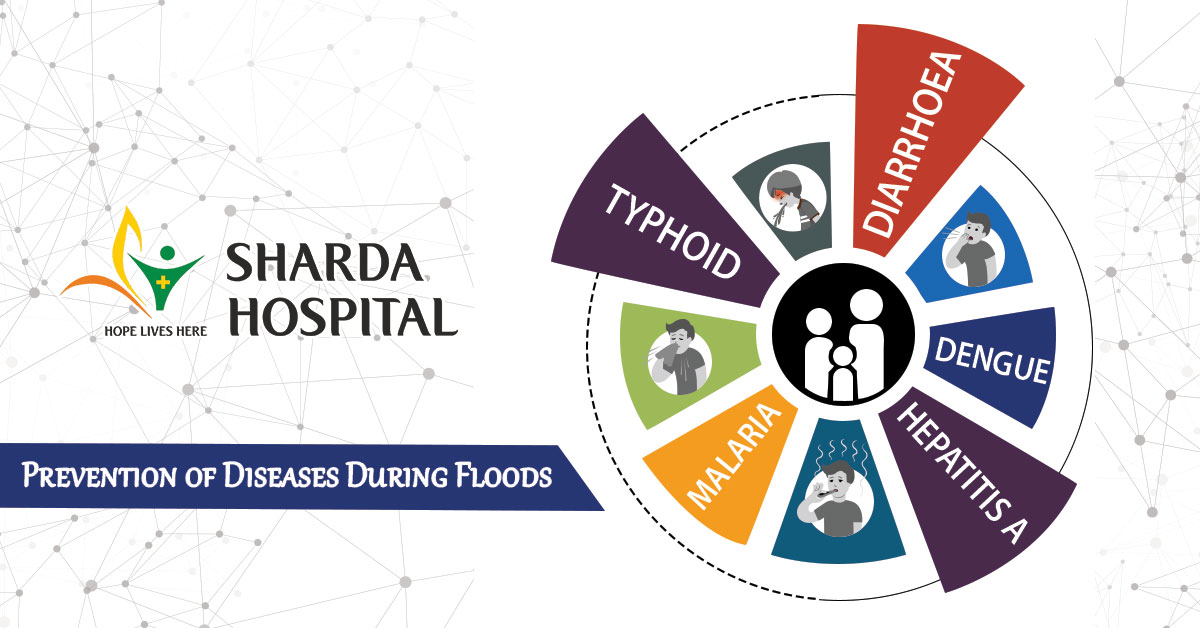 Kerala Floods have finally started receding, sweeping away hundreds of precious lives and properties. The floods have rendered thousands of people homeless, destitute and on the verge of the breakout of epidemic and diseases in its wake. Torrential rains, overflowing rivers and landslides have resulted in the death of hundreds of people in the state.

Slowly, the state is limping back to normalcy and is focusing its energies on treating and taking care of about 1.3 million displaced people. Since their homes were washed away in the mammoth deluge, many people are forced to stay in rehabilitation camps. Even as relief resources are reaching them in their camps, it is a situation far from normalcy as the state has been uprooted and suffers massive losses.

Risk of Outbreak of Diseases

Flood waters pose immediate dangers to human health as the population is often exposed to an increased risk of infections. Since drainage and sewerage system get disoriented, there is an increased risk of infection of water-borne and vector-borne diseases contracted through direct contact with polluted waters and contamination of drinking-water facilities. Wound infections, dermatitis, cholera, malaria, dengue fever, conjunctivitis, and other ears, nose and throat infections are common. Other flood disaster aftermath includes skin and soft tissue infections, gastroenteritis and zoonotic infections such as Leptospirosis. The impact of non-communicable diseases should also be taken into consideration while ascertaining the effects of the disaster. Some of these conditions are blunt trauma, crash-related injuries, or drowning.

With the aim of creating increased awareness among the affected people, Sharda Hospital, a leading name in the Delhi-NCR has compiled a list of the common diseases that occur during floods.

This is the deadliest and most common bacterial disease that spreads during floods. Cholera is caused by consuming contaminated food, water and also due to poor hygienic conditions. Common symptoms of cholera are severe diarrhoea and vomiting which results in dehydration and muscle cramps. Immediate care and treatment are required it can cause death, sometimes within hours.

This is another waterborne bacterial infection caused by Salmonella bacteria. Prolonged high fever, severe abdominal pain, headache and vomiting are common symptoms of this disease. Typhoid fever takes longer to cure and the patient is rendered very weak. Also, typhoid infection can at times remain in the gallbladder of the patient even after he/she is cured.

This is unarguably the most common waterborne disease that affects people of all ages, especially children. In overcrowded places like camps, the chances of getting infected by it are even more commonplace since the odds of contaminated food and water are high. Symptoms include dehydration, pale skin and bloody stool, little or no urination, severe dizziness, and loss of consciousness. Diarrhoea can be very deadly since the patient gets dehydrated that severely affects his/her normal body functioning.

Jaundice or Hepatitis A is another deadly waterborne disease that can severely damage the functioning of the liver. It is a viral disease caused by the Hepatitis A virus. Common symptoms observed in an infected person are nausea, vomiting, and high fever. The disease is normally spread by the faecal-oral route, by ingesting contaminated food or water. For children under age 5 years, immunization vaccine against the disease is available in the hospital and PHCs.

It is also transmitted by the faecal-oral route, as a result of the lack of access to safe water and sanitation. This endemic is more common after heavy rains and floods. Though the illness is mild and self-limited, Hepatitis E can prove fatal for pregnant women.

It is transmitted by the direct contact with contaminated water, and is epidemic-prone. During floods, humans and rodents come in close contact and there are increased chances of rodent urine mixing in water. Rodents urine contain large amounts of leptospires, a bacteria.

Malaria and Dengue: Standing water is the breeding ground for mosquitoes and exposes humans to a heightened risk of infection during floods and rain.

The most important prerequisite for reducing the spread of water-borne diseases is clean drinking water. Displaced people are compelled to live in crowded camps where the possibilities of cross-contamination of water sources with faecal material and toxic chemicals are heightened. After floods, it is very imperative for healthcare providers and NGOs to control the outbreak of water-borne diseases. This can be done by providing people with safe, sanitary disposal of faeces and provision of clean drinking water.

If the population in the affected areas are tutored about the need for washing hands frequently, drinking clean water and maintaining better sanitation and hygiene, the outbreak of an epidemic can be kept at bay. Since most of the health care systems and health facilities have also collapsed in Kerala, and there is a lack of resources, infrastructure and robust disaster-preparedness systems, it will take a while to resurrect the flood-stricken state.

Access to simple hygiene may still be unavailable or worsen due to the economic burden of disasters. Relief workers need to be prepared for the following factors to be taken care of :

Floods, Monsoons and torrential downpour are formidable forces of Nature that cannot be stopped. However, it is possible to control the diseases resulting from these natural disasters. Here the necessary concomitant is that the relief materials and resources are made available in adequate quantity and time to local and regional authorities as well as international agencies. It is the moral responsibility of the healthcare givers to own responsibility and citizens to tackle the problems from every angle so that epidemics are prevented to play havoc among the affected population.