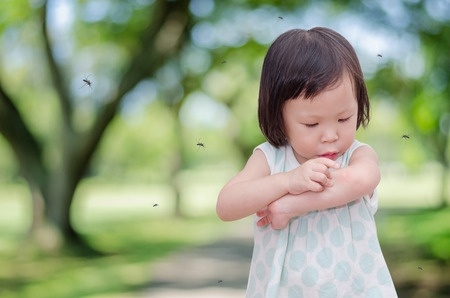 Did you know? Since the mid-'90s, the prevalence of dengue has increased in India at an alarming rate. As per a report by WHO, dengue in children is a leading cause of serious illness and death. Let's learn more about dengue symptoms, its causes, and treatments.

Dengue is a mosquito-borne viral disease and quite a threatening condition. Dengue fever usually causes skin rash and pain. It is also commonly known as "break-bone fever" or "dandy fever" as it causes unusual severe muscle and joint pains. In severe cases, it can also cause repeated vomiting, intense stomach pain, bleeding from the nose or gums, and death. Dengue in children is most prevalent who are less than 15 years of age.

What Are the Causes of Dengue in Children?

Dengue is caused by the female Aedes aegypti mosquito. It cannot be directly transmitted from person to person. Instead, it is transmittable when this mosquito bites an infected person. People who are bitten by the same mosquito afterward happen to contract this disease.

On average, dengue symptoms are visible after 3 to 10 day incubation period. Children often experience dengue symptoms similar to common cold together with vomiting and diarrhea. However, the sudden onset of fever can be a clear sign of dengue in children. Other common dengue symptoms are: Babies and young children can also have rashes along with fever. On the other hand, older children may experience severe back pain as well. In some cases, minor bleeding is also seen, for example, bleeding from gums.

What Precautions Can Be Taken?

Since there is no certain treatment for dengue, these protective measures can help in preventing dengue.

Is There Any Effective Treatment for Dengue?

As there is no certain cure, at best, some measures and medications can be provided to ease pain and discomfort. Moreover, in this case, there is no vaccination against the fever. Dengue has four strains namely DEN-1, DEN-2, DEN-3, and DEN-4. It is only possible that after contracting one strain a child builds immunity to it. However, they are not immune to the other three strains. Therefore, the later infection and symptoms are much more severe.

While there are no particular medications available for dengue, these effective remedies can relieve dengue symptoms.

When to Consult A Doctor

A moderate type of dengue goes away after a week or two. If a child's condition worsens a day or two after dengue symptoms go away, consult a doctor.